The Loneliness of the Long Distance Cyclist

No Borstals were harmed in the writing of this post…

A few weeks back I wrote about long term cycling  goals. I probably finished it up a little too early, because there was something I wanted to say, but just ran out of energy and time to expand. Shortly after that, though, I went on an Audax ride, which changed things a little bit.

Audax is, in its own words, the “Long Distance Cyclists’ Association”. They run a large number of long cycles all over the country, throughout the year. ‘Long’ usually means at least 100km, ranging all the way up to totally ludicrous events such as London-Edinburgh-London (1,400km). There are two types: calendar (organised on a specific day, where you do it with a load of other cyclists); and permanent (where you just get the route, and you do it on your own, or with a group you organise yourself).

I did one of the latter. 200km, starting a few miles away in King’s Norton, and taking in Tewkesbury and Ludlow as the two points of a triangle. Like this: 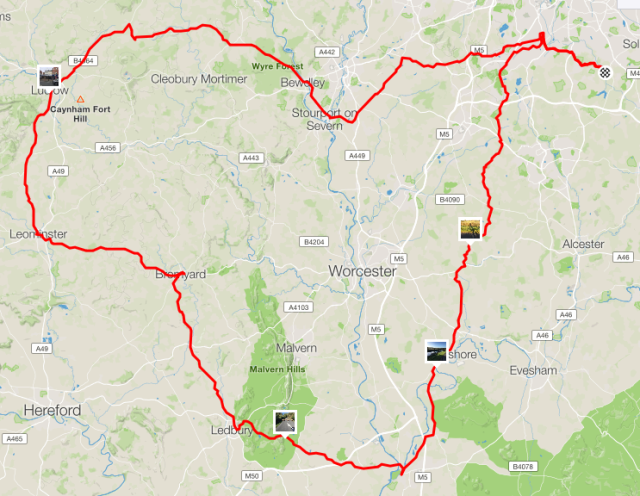 Clicking on the map should take you to the activity on Strava.

Now, I’ve done a long ride like that before, but it was organised, and involved about 100 people (the CFC Stratford 150 mile Sportive). The route was arranged so that you passed the start point at 100 miles, giving you the option to bail. So this one was an entirely different experience.

Firstly, there’s the fact that you’re on your own, tens of miles from home. Nobody to come fetch you if something goes wrong. I haven’t felt the thrill of that anywhere else besides swimming in deep water.  You’re also bereft of the assistance of other cyclists, or feed stations, or . On the CFC ride, the first 30-odd miles were in the company of a bunch of semi-pro guys, who dragged me along at an average of 22 miles an hour. I was also in a group of around 7 that helped each other do the last 40 or so. It makes a huge difference.

Secondly, there was no real point to this. I wasn’t raising money for charity, or getting a medal at the end, or anything like that. I just decided that I should do it, and so I did. I took a day off work and disappeared. I’ve never done that before. It’s just a little bit intoxicating, and I yearn for a chance to do it again.

But anyway, the realisation I got from this is that as much as I’ve developed the people-facing part of my personality over the years, I’m still an introvert at heart. Dealing with people is the only tiresome part of my job. But I only spoke to two people that whole day – one at a pub to order a drink, and another cyclist to tell him I didn’t know whether there was a bike shop in the town. With only myself to talk to, I had the chance to work through all the issues I don’t generally get around to thinking about. Normally, I find my weekly Saturday morning cycle to be like a battery recharge, but this was like a complete spring clean. In fact, I said more to these chaps while passing than I did to humans all day: 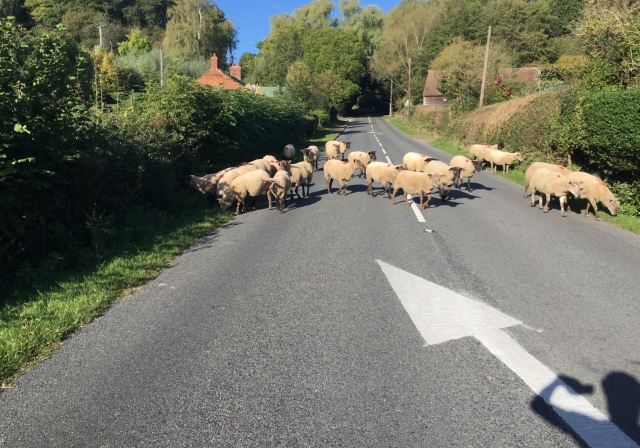 Sheep in the road passing by Hollybush

And so, getting back to those goals I mentioned at the start. I now have two. One is to join the Audax club next year, and do a few more of these rides. The other is a lot longer-term: to get my Eddington number to 100.

This entry was posted in Cycling, Psychology and tagged Audax. Bookmark the permalink.

1 Response to The Loneliness of the Long Distance Cyclist