Mille Cymru 4: Return to the Shire

I should have written this last night, when it was still fresh, but then I was stale, and in no real state to do it justice. My only thought was that it was over.

Firstly, the forecast storms never quite materialised. There were the strong winds, but of the 20mph variety, rather than 40, and there was lots of rain, but it was on and off, and I never really got thoroughly drenched as I was expecting to be.

It started off so well, though: a strong Southwester, with me riding North. Bring it on! The miles flew by, and the only fly in the ointment was the realisation, when the rain first came down at 8.31 miles, that I’d left my rain jacket at the house in Harlech. Weighing up the prospect of being wet all day vs doing an extra 16 miles, half of that into a stiff wind, I went for the former. Up to Llanberis, it was good riding, especially the descent down past the lake, where sunshine could be seen over the town. Gorgeous: 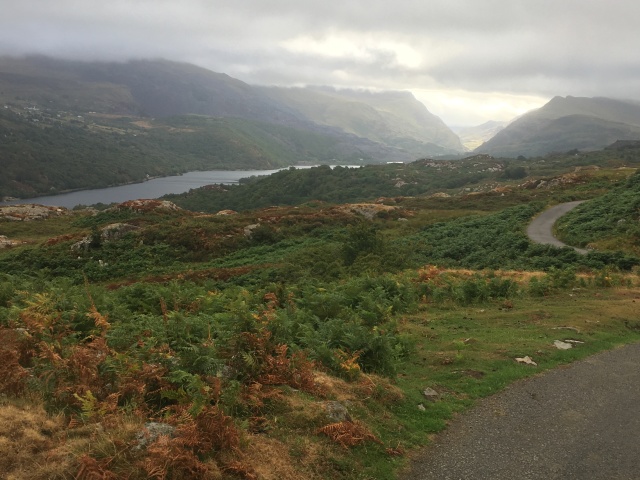 When you’re wet, and cold, riding towards the brightness is a good feeling.

However, once through Llanberis, it was a lot of climbing. Three long, arduous mountain passes, two of which were in a southerly directly, dead into the wind. Absolutely draining. Much of both of those were done standing out of the saddle, in my lowest gear, going one metre per pedal, at about 4mph. Embarrassingly slow by my usual standards, but at least I made it up without walking. Here’s the view from near the top of the first one. Dang – it looked a lot worse than that in real life, I promise. At least you can see the grass bowed over by the wind, so my story retains a scrap of credibility. 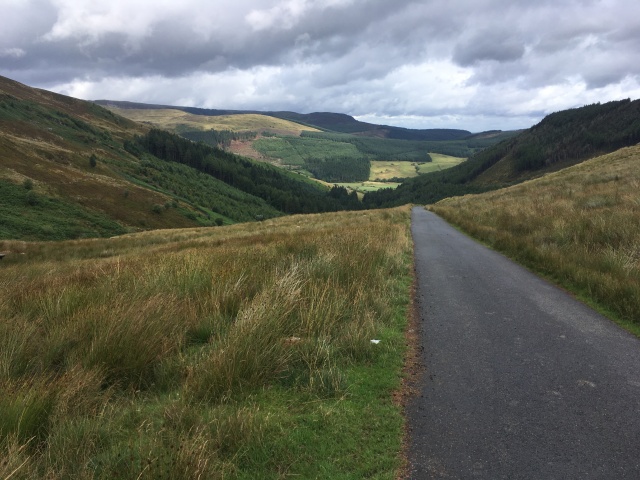 Then it was Lake Vyrnwy – a lovely long flat section along the shore, followed by a cafe stop at Artisans (where I can highly recommend the four-layer fudge cake. Hmmm yes). While I was in there, the heavens opened, and torrential rain fell for the 15 minutes I stopped. And ceased almost as suddenly as soon as I wanted to go. Perfect timing.

And after that, barring two short (but typically brutal) climbs straight away, it was downhill or flat nearly the whole way back. 40 miles of pleasure. Except that my butt was giving me serious pain (turns out to have been numerous popped blisters), my back was in agony, and the rest of me wasn’t doing too well either. Those last 10 miles were counted down almost pedal by pedal, and went slower than any I’ve ever done before. But then, the arrivee was arrived at, it was over, and a phone call to the Wiff was made to come pick me up (the previous plan of me cycling back the last 60 miles having been long abandoned!).

Here’s the video of the day:

I’ll go back over the next few days, and fill in details and videos and photos of the previous three. And probably write a final summary once the pain has been forgotten. But thanks for bearing with me (assuming you have!).

And if I may indulge in a final plug of my fundraising page, which will stay active for another week or two. Nearly at the target!

This entry was posted in Cycling and tagged Audax, Mille Cymru. Bookmark the permalink.

3 Responses to Mille Cymru 4: Return to the Shire